Associazione Italiana Archivi d’Artista (AitArt) is the outcome of the union of the main Italian artist’s archives which have started a fight against the current practices developed in the art marketplace.
Indeed, international art transactions are characterized by uncertainty and considerable imprecision (due to accidental or intentional mistakes) in particular as regards the statements on the authenticity of artistic works.
Therefore, to prevent the circulation of counterfeited artistic works and to grant a major protection to authors’ and art purchasers’ rights, AitArt adopted a code of conduct whose observance is required to all its members. The compliance with code of conduct is not mandatory, but it is a necessary requirement in order to maintain the membership of AitArt.
Furthermore, in order to prevent the raise of any eventual legal dispute among artist’s archives on issues regarding the authenticity of artistic works, AitArt established an internal scientific committee qualified to release the certificates of authenticity of artistic works. According to what stated in the aforementioned code of conduct the opinions on the authenticity of artistic works released by the scientific committee will be made available to the public.
AitArt is also promoter of national and international art and cultural events. 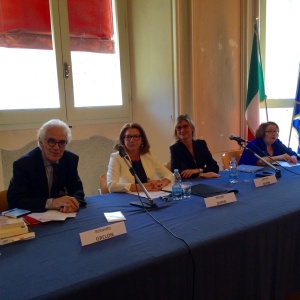 Comitato Fondazioni Italiane d’Arte Contemporanea is the result of the concerted efforts of private and public institutions in order to support the development of Italian contemporary art all through the world.
Indeed, the idea to establish such a committee was born among the major Italian contemporary art institutions and it immediately met the favour of the Italian Ministry of Cultural Heritage.
Comitato intends to pursue its purposes supporting prominent artists and new talents granting them a major visibility also through the appropriate use of new technologies and favouring their integration in the international art scene through the creation of a network of national and international relationships among museums, art foundations, art galleries and exhibition centres.
The cooperation between private and public institutions did not end with the establishment of Comitato, but it still continues as confirmed by a new protocol for the promotion of Italian contemporary art signed by the President of Comitato and the Italian Minister of Cultural Heritage on the 10 June 2015.